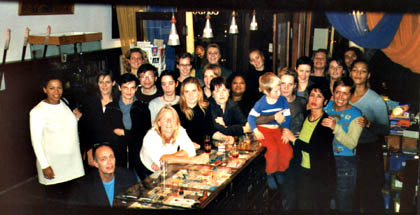 The idea for a specialised condom shop was conceived on April 10, 1987 during a lively discussion in an Amsterdam restaurant about the disease that has occupied our thoughts since the beginning of the 80's: AIDS, Acquired Immune Deficiency Syndrome. This is an incurable and deadly virus transmitted via blood or sperm, that attacks the natural immune system of the body. The expectation was that the aids virus, called HIV, Human Immunodeficiency Virus, would quickly spread throughout the world. It seemed clear that man should count on the surfacing of more new viruses. General sexual hygiene and use of condoms became essential: Safe Sex was the motto. Condoms were obtainable from pharmacies, chemists, sex shops and vending machines. There was, however, little choice or good information. It was time for a specialised condom shop with a wide selection, expert information and good service. The aim was to remove the taboo surrounding the sale of condoms and provide proper information about the different types and sizes available in an unselfconscious manner.

The HIV-virus is primarily transmitted via unprotected sexual intercourse. The chance of getting aids and othersexually transmitted diseases can be greatly reduced by the use of condoms: "sex + aids = death / sex + condom = life".

The HIV-virus doesn't discriminate. Anyone can become infected. Despite that, in 1987, a persistent rumour circulated that the HIV-virus could only afflict homosexual men. This was, of course, absolute nonsense. In order to counterbalance this image, the Condomerie decided that only the two female members of the team would be involved in the public side of the operation. This was to emphasise the fact that women as well as men have to take responsibility for preventing infection. Historically women have been more involved in preventing pregnancy. Yet of STDs, Sexually Transmittable Diseases, such as chlamydia, gonorrhoea, hepatitus-B, HIV-infection, herpes and syphilis, the first two can cause infertility in women. Pregnant women can also transfer a number of these diseases to their baby during pregnancy and birth.

The condom is, until now, the only easy-to-use means of preventing STD.

The Condomerie focuses specifically on tested condoms and helps customers find the most suitable ones for them. It also sells fun and fantasy condoms. Sometimes the safe-sex message can be brought across better with a smile.

On Saturday, May 1, 1987, the world's first specialised condom shop V.O.F. Condomerie Het Gulden Vlies opened its doors. The opening earned a lot of attention in the Dutch media and worldwide publicity followed.

The news was everywhere: "Two women in Amsterdam have opened the world's first specialised condom shop".

One aim of the Condomerie was immediately achieved: the taboo surrounding the sale and purchase of condoms was broken.

As well as a shop in Amsterdam, the Condomerie operates a wholesale and mail order business and has a huge range of condoms on offer. The team has also invested a great deal of time and money in research, resulting in an in-depth knowledge of the product. Today the Condomerie has become a concept, where people can come for personal advice and get answers to all their questions about condoms; be it size, type, allergy or anything else.