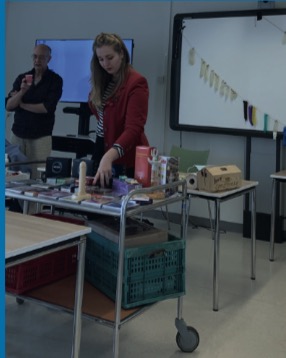 Did you know that the Condomerie is not only the world’s first specialised condom shop, but also an information and education centre? Under the name Condomology, we are always searching for new ideas and insights on reproductive health. First, because it helps us to help our customers. But also because we want to share our knowledge with healthcare professionals: people working at GGD health centres, STI nurses, dermatologists, family doctors, gynaecologists, obstetricians and midwives, and medical students.

Up until a year and half ago, we usually gave our information sessions, workshops and courses at our own premises in Amsterdam. So participants had the opportunity to touch, smell and pass around products. They would ask questions, sometimes giggle, and learn a lot in the process. Then came the global pandemic and we had to think up a new way to do it. Being flexible, we found a solution. And online, via Zoom, we still managed to reach many people working in healthcare.

During that time, we held three online Condomology workshops for doctors’ assistants (via for Soa Aids Nederland) and for GGD healthcare workers. By sending each participant a package of products beforehand, we gave them something to touch, smell and feel during the workshop.

Luckily, we were able to hold six live -covid proof- sessions for first year medical students from the AMC Faculty of Medicine in Amsterdam. And we had a Covid-proof opportunity to share our knowledge with gynaecologists, obstetricians and midwifes from a hospital in the south of the Netherlands.

We are proud that we were able to continue our educational efforts despite the pandemic. And, as ever, we could say: safety first!

The gynaecologist that invited us, wrote a column about our visit: 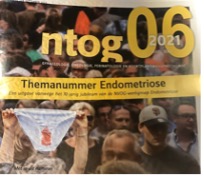 ‘You need to hold one in your hands’

Twice a week, after the gynaecology morning handover at the Den Bosch hospital, there is a teaching opportunity. This time I was responsible for organising it, together with specialty registrar Maarten van der Deijl. The theme for the month of August was ‘contraception’. IUD and IUS, the pill, sterilisation, terminations, the Tilburg ‘unplanned pregnancies’ project, history and culture – they’d all been covered. We were racking our brains to come up with something to end the month with a bang, and had the bright idea of asking the Condomerie in Amsterdam to come down to Den Bosch and shake things up a bit.

That led to the following telephone conversation:

Me: ‘Hi, I’m Mieke Kerkhof, gynaecologist at the Jeroen Bosch hospital, and I’m wondering whether you would be able to give us a presentation about your shop and your mission?’

Theodoor: ‘Oh sure, would love to, great idea, let’s do it, come to Den Bosch.’

Me: ‘So you’ll tell us something about condoms?’

Theodoor: ‘How long have you got?’

Theodoor: ‘That’s not enough time! I’m a condomologist myself, and can tell you everything you need to know, from rubber trees to condoms, but we’re also lubricantologists. I’ll mail you some stuff, then you can do some cherry picking, and tell me what you’d like.’

Me: ‘Will you bring a PowerPoint presentation?’

Theodoor: ‘No, never do that, you need to hold one in your hands – touch it, smell it, taste it, roll it down.’

When I got the email, I felt like a child in a sweet shop, with Theodoor offering me a huge assortment. Cheap private label brands, what should you watch out for? Sizes, 65 of them! What should you do about latex allergy? Colours and flavours. Do’s and don’ts. Female condoms. Lubricants (silicones, oil, etc.). Vegan, fair trade and eco condoms. Sponges. Oral dams. Moisturising gels for women going through menopause and after chemotherapy. Recent developments. Well, the only thing I can add to that list are the words et cetera.

The day arrived and I stood at the main entrance, ready to welcome Theodoor and his colleagues. In the distance, they all waved enthusiastically as they came towards me pushing a trolley with three supermarket crates. Incredibly nice, friendly people, casually dressed and sporting rainbow badges*. I felt like I’d known them for years. I showed them a quiet area of our department where they could set up their stand, as near the public lifts didn’t seem to be a good idea. As they emptied the blue crates of demo material, they chatted a lot; that really put me at ease, making the whole thing feel perfectly normal. When they met their audience, Theodoor asked for a volunteer to hang up the clothes lines with condoms. A medical student was happy to do so. The handover room has never been so cheerfully decorated.

Theodoor got started. And now I know all about condoms. It’s more about the circumference than the length. XXL condoms are just 1 mm bigger (so guys, stop showing off!)**. When erect, the average circumference should roughly fit into a toilet roll, you get the idea. Combining oil-based lubricants with condoms is a very bad idea. For me, the funniest brand was the ‘Euroglider’. And Theodoor told us how the U.S. army’s strike power was affected when sexually transmitted diseases were rife in their ranks. ‘You’ve got V1, V2 and then VD.’ The soldiers were checked with their briefs around the ankles. It was called the short arm inspection.

The outpatient clinics started, but the younger members of the department were still here. ‘Oh wait,’ said Theodoor, ‘I almost forgot about the presents.’ And everyone was given a bag with an orange sticker. A generous gift, containing a measuring tape (printed with ‘to measure is to know’ and ‘measure for pleasure’), a special condom from the Garden of Earthly Delights (Jeroen Bosch), a Wet Stuff lubricant sample and, of course, the catalogue. Because, to be perfectly clear, there are condoms with and without reservoirs, in different colours, different flavours, ribbed and dotted, both inside and out, even easy-fit and gold ones. And I’ve held all of them in my hands – a PowerPoint definitely couldn’t beat that. (The following joke could not be translated unfortunately: “ De penningmeester van de vakgroep vroeg trouwens of ze aftrekbaar waren.”)

Then off they all went, back to the Condomerie in Amsterdam, with two boxes of our local delicacies perched on top of their supermarket crates, having entertained and amazed us all in Den Bosch. What an informative morning!

(Postscript: the editor has agreed to give two accreditation points to anyone who has read this column from beginning to end.)

* Condomerie comment: we do have rainbow badges, but this was an SDG badge: Sustainable Development Goals.

** Manufacturers use an average size to determine the measurements of their condoms. But this so-called 'average' can vary from manufacturer to manufacturer. So one brand may call a condom of a certain size 'large', and another brand may call a condom with exactly the same measurements 'extra large'. To put an end to all this confusion, the Condomerie® has classified its entire assortment of tested condoms by size in a measurement system: the CAS index (Condomerie Amsterdam Standard index). 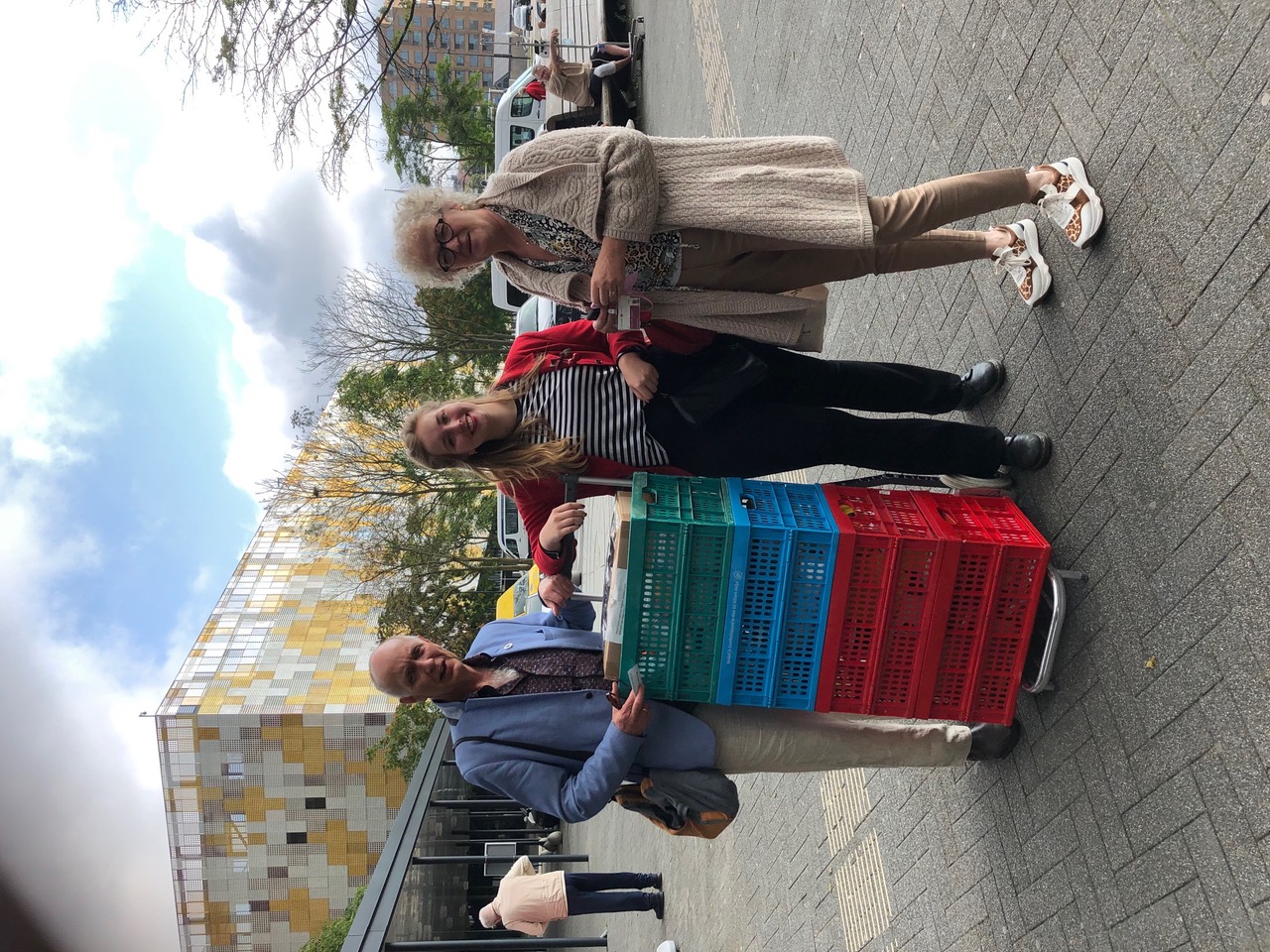