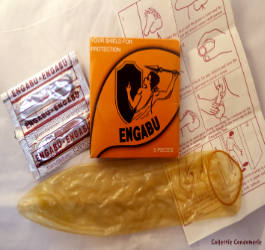 Let’s be honest. Most people prefer to have sex without a condom. Condom brands and manufacturers come up with the craziest things to make condom use fun by adding flavours, textures, prints or stimulating lubricants. The Dutch brand Wingman makes condoms that are easier to apply, EXS thinks of the most exotic flavours, Blue Diamond stimulates the erection and Einhorn provides vegan, fair trade and attractively wrapped condoms. But what is the most effective solution to make people wear condoms? In our archive, we found (interview Condomerie-founder Theodoor van Boven, NOS Met het Oog op Morgen, March 25 2013) a perfect example of a condom that was exactly what the people wanted and thereby successfully promoted condom use.

In 1991 Prof. Dr. Walter Kipp, a German professor of agriculture, conducted a research for FAO in the Kabarole district in Uganda. This research transformed into a Social Marketing project in 1992 by a District Health Team. Kipp closely worked together with Bob Mwesigye from Uganda and Paul Kabwa from the U.S. The most peculiar about the origin of the project was that it initially aimed at agricultural knowledge preservation. Knowledge was orally transmitted from one generation to the next. Unfortunately, the generation with the knowledge was threatened with extinction! Due to Aids. The situation was severe. In the suburbs there was a grandmother living with her 22 grandkids (all the parents had died) for example and the percentage of HIV infection among pregnant women was 40%. Another urgent problem on president Museveni’s agenda was the weakened army. This was also caused by Aids.

A project aimed at two important problems (preservation of knowledge and a strong army) converted into an Aids prevention program. And it was more effective than most other anti-aids-interventions (except for example Joep Lange’s project and that of Heineken in Africa, that were also initially aimed at preservation of knowledge and employees). An important part of this project was the development of a condom, especially made for the people in the Kabarole district.

The result was a condom that (1) is affordable for everyone, (2) fits into a shirt pocket, (3) has a subtle brown colour, (4) came in a 5-pack, (5) was wrapped in thin packaging and (last but not least 6) had a subtle vanilla/white chocolate aroma. The name of the condom was “Engabu”, the local word for “shield” and the logo depicted a man with spear and shield in defence against STD’s and in attack as the enemy of HIV and AIDS. Negotiations with local shop owners were made about distribution, opening hours and promotion. As public promotion of condoms was nationally prohibited, a way was found to put the name “Engabu” into the spotlights (to sell “Engabu” seemed to be less delicate then to sell “condoms” and posters stating “no condoms, no sex” were acceptable). And because advertisements in newspapers and other media were not allowed, the condoms were not only merged through seminars, health centres and consultancy services, but also through theatre and street performances.

The goal was to decrease the initial frightful statistics within 14 years. It was done within seven: HIV prevalence among pregnant women decreased from 40% to 14%. The project turned out to be a success and the condoms were sold to the last batch. Lastly, after subsidies were exhausted, the brand was taken over by the government. However, as is often the case, the project got into oblivion due to political changes that discouraged condom use by ignoring the new ABC-message (Abstinence, Be faithful, use a Condom) and replacing it with an “Abstinence Only” one.

The point, however, is that the project itself and the whole social marketing project around it has been a success, thanks to clever research: direct face-to-face contact with those people that you want to reach and placing the product within a social, political, religious and topographic context.

Conclusion 1: a great and effective aids prevention project developed as a result of another problem and (fear of complete loss of agricultural knowledge and a weakened army). Until this day NGO’s haven’t learned from or copied this kind of project (except, as mentioned Joep Lange and Heineken). Maybe the expediency of an agricultural scientist is exactly what these kinds of interventions need.
Conclusion 2: you can make a condom purple, spikey or with red flames on the sides, as long as you realise what the barriers of your target group are. Explore the population you make the condoms for and talk to them, ask them about what they think makes a good condom. And do not only think about your product itself, but about the entire context within which you want to place your product; your condom in this case. And who knows… maybe next to preventing aids, you will tackle another problem.