Physiological measures. In our studies on male sexual arousal we have made use of three different devices to measure penile circumference: the electromechanical strain gauge (Barlow et al., 1970), the Indium-Gallium strain gauge (Bancroft et al., 1966), and the Erectiometer.

The electromechanical strain gauge consists of two arcs of of surgical spring material with a pair of mechanical strain gauges at the junction (see Figure 1). Increases in penile circumference result in a flexing of the gauges and a corresponding change in resistance. A continuous electrical signal records changes in electrical output caused by expansion of the strain gauge. The gauge is calibrated using a 26-step plastic cone with known circumferences (ranging from 85 to 160 mm circumference). In the studies in which we used this gauge, subjects were asked to place it two-thirds of the way down the shaft of the penis toward the base. 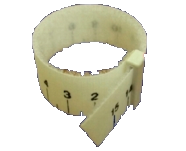 As stated, the Erectiometer requires some force to expand. An advantage of this characteristic is that whenever a response is measured it involved at least some degree of penile rigidity. It should be noted however, that for the same reason the Erectiometer may slightly underestimate penile circumference during erection. The electromechanical and Indium-Gallium strain gauges may be unreliable at the upper end of the tumescence curve (Rosen & Beck, 1988). That is, these devices may overestimate circumference at high response levels. In a comparison study, we indeed found the two strain gauges (especially the electromechanical strain gauge) to sometimes overestimate absolute levels of erection. Furthermore, we found relatively large discrepancies between these two gauges (Janssen, Vissenberg, Visser, & Everaerd, in preparation). These characteristics are not likely to influence the results of experimental studies, i.e. when comparing the effects of various different manipulations. However, they point to some serious limitations if the gauges are used for determining the full range of penile capacity. For these reasons we have decided to report only on studies in which penile circumference data was obtained using the Erectiometer.

The Indium-Gallium strain gauge consists of a fine-bore rubber tube filled with Indium-Gallium, which is sealed at both ends with platinum electrodes (see Figure 1). A continuous electrical signal records changes in electrical output caused by expansion of the gauge. Calibration is accomplished using the same procedure as described for the mechanical strain gauge. This strain gauge is also positioned two-thirds of the way down the shaft of the penis toward the base.